Earlier this month the issue of fire safety was raised and debated in Parliament by MP for Cardiff North, Jonathan Evans, following the tragic death of Sophie Rosser, the daughter of one of his constituents.

Although the main reason for raising the debate was to “examine the adequacy of the current legislative framework as it relates to fire safety”, the case of Sophie Rosser highlighted prime examples of fire safety issues seen far too often in multi-occupancy buildings (e.g. apartment blocks).

Mr Evans primary concern, reiterated by many fire safety professionals, is the “lack of clarity about who is accountable for the implementation of fire safety laws.”

“In large-scale developments, who has that responsibility? Is it the owner, the property management company, the residents’ association or the individual tenant? Responsibilities sometimes seem to overlap to such an extent that each party comes to believe that it is someone else’s job to ensure that fire safety rules are followed.”

He emphasised this point with regard to fire doors, “sophisticated pieces of engineering that are fundamental to fire safety strategy in buildings” that “protect escape routes in communal areas”. But, he said, if they are to save lives, “they must work correctly and be regularly inspected and tested.”

He quoted a recent survey by fire risk assessors that found that 80% of escape routes in buildings were obstructed, 65% of fire doors were wedged open, and 85% had their self-closing mechanism disconnected. 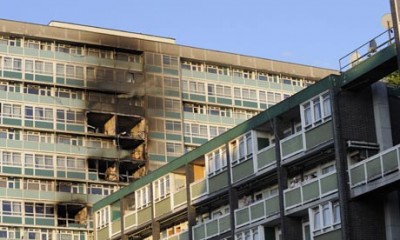 Following the receipt of a report on Lakanal House, The London Fire & Emergency Planning Authority concluded: “Nearly 10 years after the introduction of the… Fire Safety… Order…the Authority wishes to explore whether the regime is achieving all that is desirable… Specifically, the Authority is concerned that there are issues about: complexity; understanding among responsible persons’.

In addition the Authority also believed that there were “contradictions or gaps in the total legislative framework…and that the system of devolved managerial and democratic oversight of fire safety protection activities is unsupported by common methodologies or performance measures. There are also issues about how well guidance is informing responsible persons”.

Following the report, the planning authority has now commissioned a study of the legislative framework which will consider, among other things, the general background to and the principles underpinning fire safety legislation – including who has responsibility for fire safety.

Mr Evans said his constituents want clearer definitions of who is responsible for fire safety in multi-occupancy lettings, and legislation to require regular fire risk assessments by properly certified people.

Graham Holloway, managing director of Vulcan Fire Training, said: "The application of the FSO to blocks of flats has proved problematic and has led to widely varying outcomes. A range of actions go from significant work to upgrade fire safety standards within the common parts, to none considered necessary. Confusion continues to range over the scope of this legislation and how it relates to those who live in the flat beyond the flat entrance door.

The Blocks of Flats guide is intended to meet the needs of housing providers and enforcing authorities for guidance tailored to purpose-built blocks of flats.

Traditionally 75% of people killed in fire in the UK are found in dwellings, with flats having more fires than houses. The vast majority of fatal fires in flats do not have fatalities in adjacent flats, with Lakanal House fire being the exception to the rule.

Individual flats should have hard wired automatic fire detection communal fire alarm systems but are not installed accept where it is the only practicable way of ensuring an adequate level of safety. The effectiveness working of the flat fire detection is normally the occupant’s responsibility to report defects.

The issue with self-closing fire doors being disabled wedged open is also a problem that is present in most buildings sadly, with devices such as dorgard devices being a costly alternative.

Adequate ventilation arrangement should be present in new builds but could be compromised by alterations to the premises.  Ventilation in older premises may well be inadequate in the case of a fire.

Regular fire risk assessments are a requirement by legislation to enable the responsible person to determine the necessary fire safety measures are present or additional measures are required."